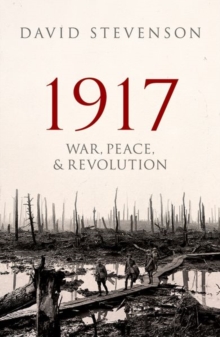 1917 was a year of calamitous events, and one of pivotal importance in the development of the First World War.

In 1917: War, Peace, and Revolution, leading historian of World War One, David Stevenson, examines this crucial year in context and illuminates the century that followed.

He shows how in this one year the war was transformed, but also what drove the conflict onwards and how it continued to escalate. Two developments in particular-the Russian Revolution and American intervention-had worldwide repercussions.

Offering a close examination of the key decisions, Stevenson considers Germany's campaign of 'unrestricted' submarine warfare, America's declaration of war in response, and Britain's frustration of German strategy by adopting the convoy system, as well as why (paradoxically) the military and political stalemate in Europe persisted.

Focusing on the abdication of Tsar Nicholas II, on the disastrous spring offensive that plunged the French army into mutiny, on the summer attacks that undermined the moderate Provisional Government in Russia and exposed Italy to national humiliation at Caporetto, and on the British decision for the ill-fated Third Battle of Ypres (Passchendaele), 1917 offers a truly international understanding of events.

The failed attempts to end the war by negotiation further clarify the underlyingforces that kept it going.

David Stevenson also analyses the global consequences of the year's developments, showing how countries such as Brazil and China joined the belligerents, Britain offered 'responsible government' to India, and the Allies promised a Jewish national home in Palestine.

Blending political and military history, and moving from capital to capital and between the cabinet chamber and the battle front, the book highlights the often tumultuous debates through which leaders entered and escalated the war,and the paradox that continued fighting could be justified as the shortest road towards regaining peace.