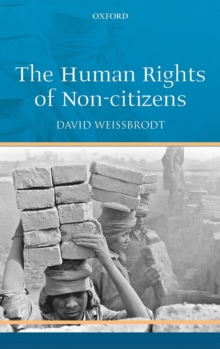 The Human Rights of Non-citizens Hardback

This book argues that regardless of their citizenship status, non-citizens should, by virtue of their essential humanity, enjoy all human rights unless exceptional distinctions serve a legitimate State objective and are proportional to the achievement of that objective.

Non-citizens should have freedom fromarbitrary arrest, arbitrary killing, child labour, forced labour, inhuman treatment, invasions of privacy, refoulement, slavery, unfair trial, and violations of humanitarian law. Additionally, non-citizens should have the right to consular protection; equality; freedom of religion and belief; labourrights (for example, as to collective bargaining, workers' compensation, healthy and safe working conditions, etc.); the right to marry; peaceful association and assembly; protection as minors; social, cultural, and economic rights. There is a large gap, however, between the rights that international human rights law guarantee to non-citizens and the realities they face.

In many countries, non-citizens are confronted with institutional and endemic discrimination and suffering.

The situation has worsened since 11 September 2001, as several governments have detained or otherwise violated the rights of non-citizens in response to fears of terrorism.

This book attempts to understand and respond to the challenges ofinternational human rights law guarantees for non-citizens human rights.