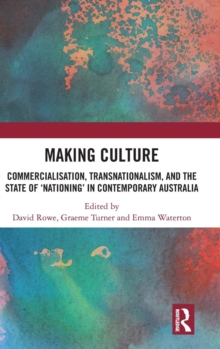 Making Culture : Commercialisation, Transnationalism, and the State of 'Nationing' in Contemporary Australia Hardback

Making Culture provides an in-depth discussion of Australia's relationship between the building of national cultural identity - or 'nationing' - and the country's cultural production and consumption.

With the 1994 national cultural policy Creative Nation as a starting point for many of the essays included in this collection, the book investigates transformations within Australia's various cultural fields, exploring the implications of nationing and the gradual movement away from it.

Underlying these analyses are the key questions and contradictions confronting any modern nation-state that seeks to develop and defend a national culture while embracing the transnational and the global. Including topics such as publishing, sport, music, tourism, art, Indigeneity, television, heritage and the influence of digital technology and output, Making Culture is an essential volume for students and scholars within Australian and Cultural studies.