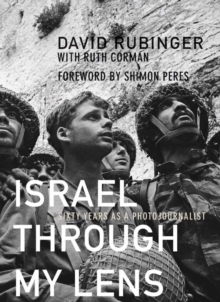 Israel Through My Lens: Sixty Years as a Photojournalist Hardback

The compelling autobiography of Israel's preeminent photojournalist, illustrated with his most memorable images. Today, photojournalist David Rubinger stands at the peak of his profession: a winner of the Israel Prize for services to the media and a fixture on the masthead of Time, he is the only photographer whose work is on permanent display at the Knesset, Israel's legislature.

In this fascinating volume, he reports his own story, which in many ways reflects the history of Israel that he has recorded so faithfully with his camera.

Born in Vienna in 1924, he emigrated to British Palestine in 1939 and developed a passion for photography while serving in the British army's Jewish Brigade.

After fighting in Israel's War of Independence, he became a professional news photographer, reporting on each of his young nation's subsequent wars from the front lines, at first for the Israeli media and later as a correspondent for Time-Life.

He photographed all of Israel's leaders, many of whom have allowed him a remarkable degree of access to their lives; Ariel Sharon said, "I trust Rubinger even though I know he doesn't vote for me."But Rubinger has not confined his reporting to war and politics; by photographing the successive waves of Jewish immigrants from Europe, the Arab world, Russia, and Ethiopia, he has also created a valuable record of Israel's transformation from a country of six hundred thousand to one of seven million. In recounting his eventful career, Rubinger proves himself a gifted raconteur, sharing anecdotes of the many leading personalities he has photographed and telling the stories behind his most famous pictures, many of which are reproduced here at fullpage size.

Also illustrated are a selection of Rubinger's never-before-published personal photographs, which provide vivid behind-the-scenes glimpses into the fast-paced and sometimes daring work of a photojournalist.

Both a personal account of one man's life with the camera and a visual document of the birth of a nation, Israel through My Lens is an essential book for anyone with an interest in Israeli history or the art of photojournalism.