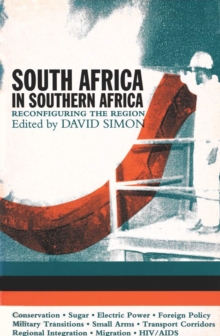 South Africa's release of Nelson Mandela from prison in February 1990 and the subsequent independence of nearby Namibia heralded other dramatic political and economic changes in southern Africa that have transformed the region from a global flashpoint to one in which peaceful cooperation and development may become the norm.

However, the substantial literature on changes in southern Africa has focused on individual nations, areas, or communities.

Important regional dynamics that transcend national boundaries, as well as the imbalance between South Africa and the other states, have been virtually ignored.

South Africa in Southern Africa addresses this imbalance as it examines in great depth - and from diverse disciplinary perspectives - the relationships between South Africa and its neighbors.

Fourteen contributors examine such issues as the military legacy in southern Africa, conservation of natural resources, South Africa's foreign policy, the role of sugar in economic development, and legal and illegal migration patterns, including labor markets and female migration.

A substantial, sobering chapter deals with HIV/AIDS and the implications of its spread. This book is vital for understanding regional dynamics and the quest for stability in southern Africa.