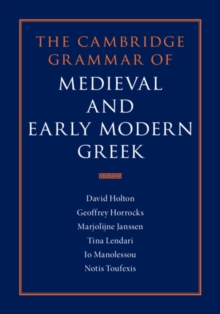 The Greek language has a written history of more than 3,000 years.

While the classical, Hellenistic and modern periods of the language are well researched, the intermediate stages are much less well known, but of great interest to those curious to know how a language changes over time.

The geographical area where Greek has been spoken stretches from the Aegean Islands to the Black Sea and from Southern Italy and Sicily to the Middle East, largely corresponding to former territories of the Byzantine Empire and its successor states.

This Grammar draws on a comprehensive corpus of literary and non-literary texts written in various forms of the vernacular to document the processes of change between the eleventh and eighteenth centuries, processes which can be seen as broadly comparable to the emergence of the Romance languages from Medieval Latin.

Regional and dialectal variation in phonology and morphology are treated in detail.