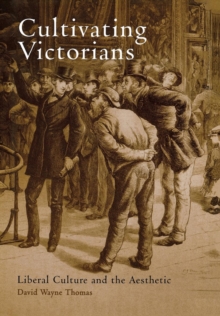 Through meticulous examinations of literature, visual arts, popular culture, and politics, Cultivating Victorians shows how a mid-Victorian liberal discourse of individual "many-sidedness"-understood as a cultivated disposition toward self-criticism and open-mindedness-was taken up by artists and writers as they claimed for art a self-reflecting agency at the core of the liberal ideal.

Thomas makes plain, as well, the ongoing but often repressed stake of latter-day critics in the aesthetics of many-sidedness.

As Thomas shows, an increasingly dominant mid-Victorian liberal culture employed its rhetoric of cultivation in projects as varied as aesthetic appreciation, self-improvement, and social amelioration.

By looking to topics across both elite and popular culture, Thomas demonstrates how this liberal culture had to take shape in competition with other dimensions of Victorian public life.

Thus several uncommon but illuminating contexts come under inspection here: the bizarre sensation of the Tichborne Claimant, a low-born imposter claiming a noble inheritance; the reportage on life-scale historical city replicas fashioned for temporary public exhibitions in the 1880s; and Dante Gabriel Rossetti's practice of producing and reproducing his artwork for a newly constituted consumer market.