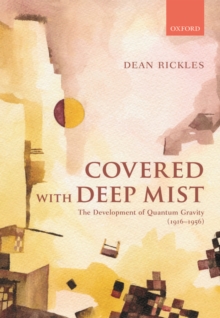 Covered with Deep Mist : The Development of Quantum Gravity (1916-1956) Hardback

The problem of quantum gravity is often viewed as the most pressing unresolved problem of modern physics: our theories of spacetime and matter, described respectively by general relativity (Einstein's theory of gravitation and spacetime) and quantum mechanics (our best theory of matter and the other forces of nature) resist unification.

Covered with Deep Mist provides the first book-length treatment of the history of quantum gravity, focusing on its originsand earliest stages of development until the mid-1950s.

Readers will be guided through the impacts on the problem of quantum gravity resulting from changes in the two ingredient theories, quantum theory and general relativity, which were themselves still under construction in the years studied.

We examine howseveral of the core approaches of today were formed in an era when the field was highly unfashionable.

The book aims to be accessible to a broad range of readers and goes beyond a merely technical examination to include social and cultural factors involved in the changing fortunes of the field.

Suitable for both newcomers and seasoned quantum gravity professionals, the book will shine new light on this century-old, unresolved problem.