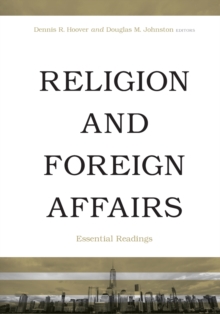 The role of religion in foreign policy debates, while never absent, has often been sidelined by popular prejudices and secular demands.

The religious resurgence in America and the threat of extremist terrorism abroad have paved the way for a renewed recognition of the necessity of careful and candid dialogue about religion's place in international affairs.

In recent years, scholars, practitioners, and policymakers have consistently reflected upon the role of religion in foreign policy, resulting in a vast, rich array of resources important for moving forward in an increasingly pluralistic world.

From the ethics of force and peacemaking to globalization and American foreign policy, this compendium provides a solid introduction to the field of religion and foreign affairs that will stimulate discussion and encourage intelligent practice.