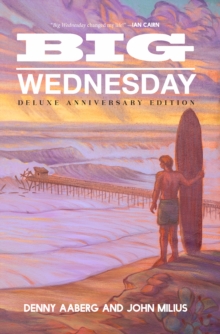 Deluxe Hardcover edition, featuring a photo insert, surfing map of Southern California, 8 pages of the original script to the film Big Wednedsday, essays by Roger McGrath, Tatsuo, Don James, and Peter Townend, as well as John Milius' original pitch letter to Lynn Nesbit, a surf term glossary, and new afterword!Big Wednesday, based on the cult 1978 film by the same name, follows three California beach buddies begin to realize there is more to life than waxing down their surfboards as they ditch their alcoholic and unruly ways to go fight in the Vietnam War.

When they reunite ten years later, they find that things in Malibu are much different after fighting a war.