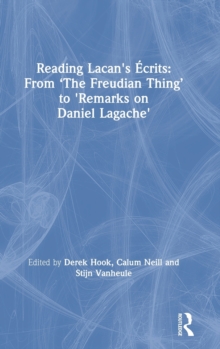 Reading Lacan's Ecrits: From 'The Freudian Thing' to 'Remarks on Daniel Lagache' Hardback

The Ecrits was Jacques Lacan's single most important text, a landmark in psychoanalysis which epitomized his aim of returning to Freud via structural linguistics, philosophy and literature.

An invaluable document in the history of psychoanalysis, and one of the most challenging intellectual works of the 20th Century, Lacan's Ecrits still today begs the interpretative engagement of clinicians, scholars, philosophers and cultural theorists.

The three volumes of Reading Lacan's Ecrits offer just this: a series of systematic paragraph-by-paragraph commentaries - by some of the world's most renowned Lacanian analysts and scholars - on the complete edition of the Ecrits, inclusive of lesser known articles such as `Kant with Sade', `The Youth of Gide', `Science and Truth', `Presentation on Transference' and `Beyond the "Reality Principle"'.

The originality and importance of Lacan's Ecrits to psychoanalysis and intellectual history is matched only by the text's notorious inaccessibility.

Not only does it contextualize, explain and interrogate Lacan's arguments, it provides multiple interpretative routes through this most labyrinthine of texts.

Reading Lacan's Ecrits provides an incisive and accessible companion for psychoanalysts and psychoanalytic psychotherapists in training and in practice, as well as philosophers, cultural theorists and literary, social science and humanities researchers who wish to draw upon Lacan's pivotal work.