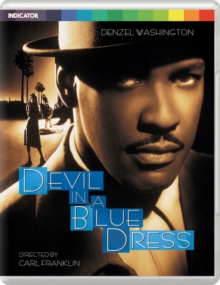 Devil in a Blue Dress Blu-ray

Denzel Washington stars in this 1990s film noir based on the novel by Walter Mosley.

In 1948, Los Angeles private eye Easy Rawlins (Washington) accepts a seemingly routine assignment from a wealthy businessman in order to make some money.

However, the missing woman he has been tasked with finding leads him into dangerous territory, and, two murders later, he turns to a friend for help.