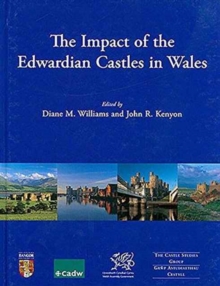 The Impact of the Edwardian Castles in Wales Paperback / softback

The Impact of the Edwardian Castles in Wales publishes the proceedings of a conference held in 2007 a year that marked the seventh centenary of the death of King Edward I which set out to review recent scholarship on castles that he built in north Wales after two wars, in 1277 and 1282-83 and a Welsh uprising in 1294-95, and to rethink the effect that their building had upon Wales in the past, present and future. Building upon the seminal work of Arnold Taylor, whose study of the buildings and documentary evidence has been pivotal to Edwardian castle studies for more than fifty years, the volume includes papers which call into question the role of Master James of St George as the architect of the kings new castles; the role of Richard the Engineer, the nature of royal accommodation in the thirteenth century and a detailed look at how households worked, especially in the kitchen and accounting departments. New approaches to castle studies are encouraging a more holistic understanding of the Edwardian castles and their context and to this end papers consider their impact on Welsh society and its princes in the thirteenth century, notably Llywelyn ab Iorwerth ( Fawr , the Great) and his grandson, Llywelyn ap Gruffudd, prince of Wales.

Their symbolism and meaning through the words of Welsh poets and the mythology behind Caernarfon Castle are also examined, so too is the role of Welshmen in Edward Is armies.

The wider context is considered with papers on the Edwardian towns in Wales, the baronial castles in north Wales and Edward I in Scotland and Gascony.

The castles still have powerful resonance and the Minister for Heritage in the Welsh Assembly Government considers their role and presentation in Wales today and in the future.

Robert Liddiard concludes that the volume 'not only takes our knowledge of the Edwardian castles forward, but also informs the study of castles in the British Isles'.