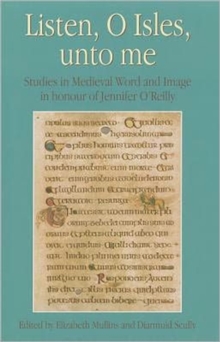 Listen, O Isles, Unto Me : Studies in Medieval Word and Image in Honour of Jennifer O'Reilly Hardback

This interdisciplinary collection, which brings together new research on a range of patristic and medieval texts and visual materials, sets the cultural transformation of early medieval Ireland and Britain in the context of these islands' inheritance from late antiquity and their engagement with the wider medieval world.

It testifies to the imaginative ways in which scholars and artists assimilated and creatively re-interpreted the Christian and Mediterranean culture they encountered through the coming of Christianity, a central theme in the work of Dr Jennifer O'Reilly.

The first section, 'Inheritance and Transmission' sets the scene with contributions examining the interplay of classical and Christian ideas in late antique texts; early medieval Irish, English and continental responses to patristic themes in text and manuscript; cultural and political links between Ireland, Britain, and the continent. The second section, 'Monasticism in the Age of Bede' focuses initially on Bede as heresiologist, exegete, martyrologist, and historian, addressing issues that include orthodoxy, the cult of saints, church reform, and the representation of women. The section's later papers continue these themes: Anglo-Saxon views of conception and birth, the Irish and English cult of St Gregory the Great, and the understanding of scripture in Adomnan's Life of Columba. The third section, 'Exegesis and the language of Pictures', explores the visual representation of scriptural exegesis in Insular sculpture and illuminated manuscripts.

Papers investigate representations of secular and sacred figures in art, ideals of beauty, and the meaning and symbolism of artworks including the Ruthwell cross and the Book of Kells.