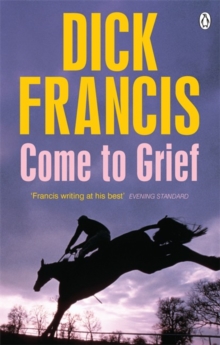 Come to Grief is a classic novel from Dick Francis, one of the greatest thriller writers of all time. Sid Halley, ex-champion jockey turned investigator, is facing his toughest test. A number of horses have been brutally mutilated, horrifying their owners and the general public.

Even Sid's friend, broadcaster Ellis Quint, has been moved to make a shocking programme about it. But when Sid is asked to look into the case, the evidence he uncovers points in a startling direction and he finds that his head must overrule his heart. As friends and associates are angered by his discoveries, so Sid is drawn into a terrible web of conspiracy and intrigue.

Escape will require all his legendary wits and cunning . . . Packed with intrigue and hair-raising suspense, Come to Grief is just one of the many blockbuster thrillers from legendary crime writer Dick Francis.