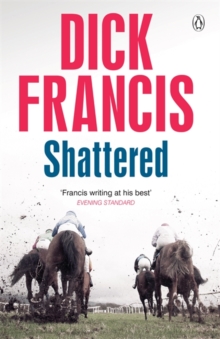 Shattered is a classic novel from Dick Francis, one of the greatest thriller writers of all time. Cheltenham Races, New Year's Eve. Gerard Logan witnesses the death of his close friend, jockey Martin Stukely, after a fall from his horse.

In the aftermath, Gerard is left to pick up the pieces - including a mysterious unmarked videotape that Martin secretly left him. But before Gerard gets to watch it, the videotape is stolen. And soon further crimes against Gerard and those close to him start to occur.

What was on the missing videotape? And why are the attacks continuing?In order to stay alive, Gerard needs to keep one step ahead of his enemies and uncover the truth - before his livelihood and everything he loves is shattered for good. Packed with intrigue and hair-raising suspense, Shattered is one of the many blockbuster thrillers from legendary crime writer Dick Francis.