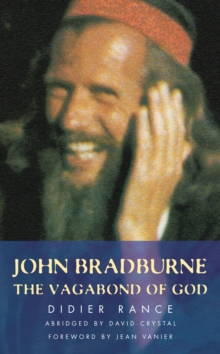 From the Foreword by Jean Vanier:`The story of John's life has touched my heart and soul, and brought me closer to God.

It has revealed to me a God wonderfully full of surprises, better, more intelligent, more creative than we could imagine.

An extraordinary God who cannot be confined in rational concepts or in an "ordinary" religious life.'~John Bradburne (1921-1979) lived an extraordinary life.

He was a reluctant hero of the Second World War, a pilgrim and a hermit, a poet and a musician, a joker and a mystic, and a theologian.

After many years travelling and searching, he found the place that God wanted him to be - living alongside men and women suffering with leprosy in Mtemwa, Zimbabwe, which he helped transform into a community of peace, joy and love.

During the civil war of 1979, John was kidnapped and murdered.

Since his martyrdom, word of his life has spread around the world, and miracles have occurred in association with his name. John Bradburne: The Vagabond of God is the most comprehensive biography of this remarkable man, based on three years of research through the archives of the John Bradburne Memorial Society (www.johnbradburne.com), interviews with people who knew John, and travels in his footsteps.

The book was published first in France, where it won the Grand Prix Catholique de Litterature.