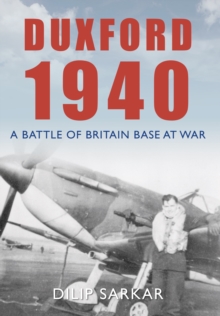 Duxford 1940 : A Battle of Britain Base at War Paperback / softback

The Imperial War Museum site at Duxford is rightly recognised as the premier aviation museum in Europe, hosting exciting air shows and where the evocative sight and sound of an airborne Spitfire can be experienced most days.

Back in the dark days of 1940, however, when Britain alone defied Nazi Germany, Duxford was a crucial Sector Station in Fighter Command's front line. Flying Hurricanes and Spitfires, Allied fighter pilots scrambled from Duxford's grass runway time and time again to engage the enemy.

Indeed, from here that legendary airman Douglas Bader frequently sallied forth to drive back the Luftwaffe that fateful summer, alongside other 'aces' such as Brian Lane, George 'Grumpy' Unwin, and Alan 'Ace' Haines.

Duxford's Station Commander was the flamboyant Group Captain 'Woody' Woodhall, who doubled as the fighter controller; the introduction to this book features his hitherto unpublished memoir on the Battle of Britain period, leading the reader perfectly into this unique collection of extremely rare photographs presented by well-known aviation historian Dilip Sarkar. Most photographs originate in the personal albums of Duxford survivors, and provide, therefore, an incredible window through which we are able to glimpse the life, and death, at Battle of Britain Duxford.