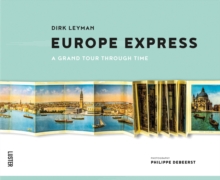 Dirk Leyman became interested at a very young age in these peculiar accordion postcard albums, which every self-respecting tourist and souvenir hunter used to take home from their holiday.

Dirk started to systematically collect them as time went by. The snapshots, which are folded in zig-zag fashion, are like relics of a long-gone era.

Some are veritable typographical and photographic gems.

Others are borderline kitsch, with their heavy-handed use of colour.

Europe Express spans the decades between the two World Wars to the early Eighties, with photos of San Marco in Venice and the elegant Grand Hotels and the utopian, upstanding world of the former Soviet Union.