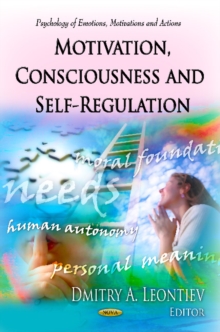 Edited by Dmitry A. Leontiev

The first part of this book is devoted to the old problem of fundamental motivations that can hardly be approached in another way, other than theoretically.

The second part of the book is devoted to new or rather marginal concepts that seem capable to enrich general models of motivational processes.

Part three of the book deals with the issues of self-regulation and self-determination; in the last two decades the problems of motivation can be hardly dealt with without touching these issues.

The focus of the last part of the book is cultural context and cultural mediation of motivation.