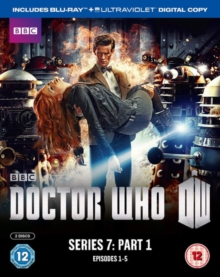 The first five episodes from the seventh series of the relaunched sci-fi adventure show.

This time around, the Doctor (Matt Smith), along with companions Amy (Karen Gillan) and Rory (Arthur Darvill) - making their series farewell - are kidnapped by the Daleks, transported to the American Wild West and find themselves having to save Earth from an unlikely invasion.

The episodes are: 'Asylum of the Daleks', 'Dinosaurs On a Spaceship', 'A Town Called Mercy', 'The Power of Three' and 'The Angels Take Manhattan'.