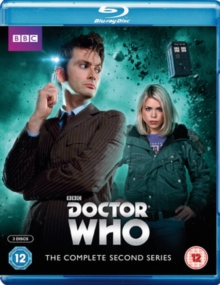 All 14 episodes from the second series of the relaunched sci-fi adventure drama, starring David Tennant as the latest incarnation of the legendary Time Lord.

In this series, the tenth Doctor takes companion Rose Tyler (Billie Piper) to New Earth and struggles to overcome the effects of regeneration.

In the opening Christmas episode London is deluged by Santa Claus impersonators and Christmas trees intent on malice.

Mankind is threatened by a planetary invasion and there's only the Prime Minister to battle it out.

The episodes are: 'The Christmas Invasion', 'New Earth', 'Tooth and Claw', 'School Reunion', 'The Girl in the Fireplace', 'Rise of the Cybermen', 'The Age of Steel', 'The Idiot's Lantern', 'The Impossible Planet', 'The Satan Pit', 'Love and Monsters', 'Fear Her', 'Army of Ghosts' and 'Doomsday'.