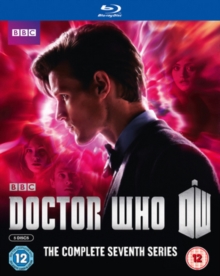 All the episodes from the seventh series of the relaunched sci-fi adventure drama, starring Matt Smith in his final appearances as the legendary Time Lord.

This time around, the Doctor (Smith), along with companions Amy (Karen Gillan) and Rory (Arthur Darvill) - also making their series farewell - are kidnapped by the Daleks, transported to the American Wild West and find themselves having to save Earth from an unlikely invasion.

The episodes are: 'The Doctor, the Widow and the Wardrobe', 'Asylum of the Daleks', 'Dinosaurs On a Spaceship', 'A Town Called Mercy', 'The Power of Three', 'The Angels Take Manhattan', 'The Snowmen', 'The Bells of Saint John', 'The Rings of Akhaten', 'Cold War', 'Hide', 'Journey to the Centre of the TARDIS', 'The Crimson Horror', 'Nightmare in Silver' and 'The Name of the Doctor'.