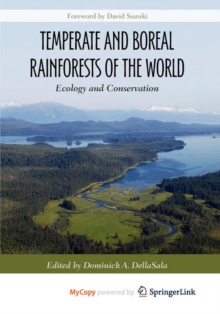 Temperate and Boreal Rainforests of the World : Ecology and Conservation Paperback / softback

Edited by Dominick A. DellaSala

Yet these ecosystems are also unique, supporting rainforest communities, rich in plants and wildlife and containing some of the most massive trees on Earth. "Temperate and Boreal Rainforests of the World" brings together leading international scientists to describe the ecology and conservation of these lesser-known rainforests in an attempt to place them on par with tropical rainforests in conservation efforts.

The book ends with a summary of the key ecological findings and outlines an ambitious vision of how we can conserve and manage the planet's remaining temperate and boreal rainforests in a truly ecological way that is better for nature, the climate, and ultimately our own welfare. "Temperate and Boreal Rainforests of the World" is a call to action for an accord to protect the world's rainforests.

It offers a global vision rooted in ecological science but written in common language useful for governments, decision makers, and conservation groups concerned about the plight of these remarkable forests.