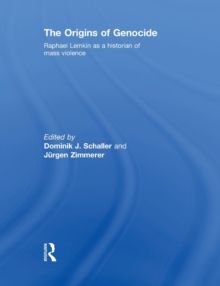 The Origins of Genocide : Raphael Lemkin as a historian of mass violence Paperback / softback

This year the United Nations celebrated the 'Convention on the Prevention and Punishment of the Crime of Genocide', adopted in December 1948.

It is time to recognize the man behind this landmark in international law.

At the beginning were a few words: "New conceptions require new terms.

By 'genocide' we mean the destruction of a nation or of an ethnic group".

Rarely in history have paradigmatic changes in scholarship been brought about with such few words.

Putting the quintessential crime of modernity in only one sentence, Raphael Lemkin (1900-1959), the Polish Jewish specialist in international law, not only summarized the horrors of the National Socialist Crimes, which were still underway, when he coined the term "genocide" in 1944, but also influenced international law.

As the founding figure of the UN Genocide Convention Lemkin is finally getting the respect he deserves.

Less known is his contribution to historical scholarship on genocide.

Until his death, Lemkin was working on a broad study on genocides in the history of humankind.

Unfortunately, he did not manage to publish it. The contributions in this book offer for the first time a critical assessment not only of his influence on international law but also on historical analysis of mass murders, showing the close connection between both. This book was published as a special issue of the Journal of Genocide Research.