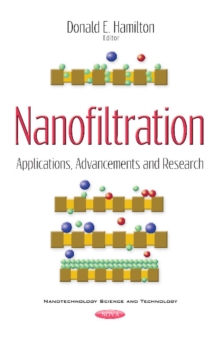 Molecular scale separations have been possible since the latter part of the 20th century with the advent of reverse osmosis and nanofiltration for separation of ions and other molecules.

Nanofiltration (NF) membranes have come a long way since it was first introduced during the late 80's.

Until recently, industrial applications of separation techniques have been almost exclusively used in the treatment of waste water and desalination but in the last years several applications in the food, beverage, pharmaceutical and biotechnology industries have been developed, including with non-aqueous solvents.

Chapter One covers the membrane separation of molecules dissolved in organic liquids, a new area of membrane science with huge potential for applications across chemical-related industry sectors.

Chapter Two is devoted to the mathematical modelling of nanofiltration and describes discontinuous diafiltration by periodically added solvent at a constant pressure difference.

In Chapter Three, basic theory on the critical, threshold and boundary flux theories will be covered, leading to measurement methods of the corresponding parameters and the use of these data for optimised process design.

The objective of this approach is to operate the process without incurring in irreversible or high fouling issues for a long period of time in the plant.

Chapter Four gives an overview regarding nanofiltration application for recovering high added-value compounds from the above mentioned agroindustrial by-products and waste streams.

For example, in cheese making production, NF has been recently used to recover the components of cheese whey ultrafiltration (UF) permeates of a molecular weight lower than 1000 Da, aiming for its selective separation, concentration and/or demineralisation, with advantages over other techniques.