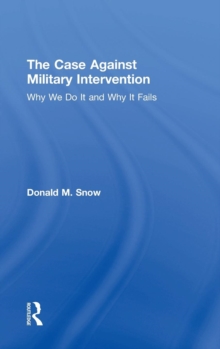 The Case Against Military Intervention : Why We Do It and Why It Fails Hardback

Since World War II, military intervention in developing world internal conflicts (DWIC) has become the primary form of U.S. military activity, and these interventions have proven unsuccessful in places like Vietnam, Iraq, and Afghanistan.

This book argues such failure was entirely predictable, even inevitable, due both to the nature and dynamics of foreign military intrusion in the affairs of other countries and especially the DWICs that provide the major contemporary form of potential U.S. military in the foreseeable future. Basing its analysis in both human nature (the adverse reaction to prolonged outsider intrusion) and historical analogy, the book argues strongly why military intervention should be avoided as a national security option and the implications of such a policy decision for national security strategy and policy.