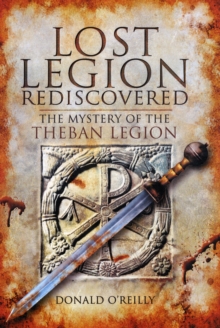 Lost Legion Rediscovered: The Mystery of the Theban Legion Hardback

In AD383, according to Bishop Eucherius of Lyon, flooding caused part of the bank of the River Rhone to collapse, revealing a mass grave.

Eucherius identified the bodies as those of legionaries recruited to the Roman army from the Christians of the Theban district in Egypt, whom he claimed had been massacred nearly a century previously (near the modern village of St Maurice-en-Valais in southwestern Switzerland) for refusing to obey orders they considered immoral.

This incident, asserted by Eucherius as matter of fact, is unrecorded elsewhere.

Even the existence of this Theban legion is unclear.Intrigued by this discrepancy, and suspecting a cover-up by official Roman sources, Dr Donald O'Reilly has spent many years undertaking some historical detective work.

Piecing together scattered clues from ancient coins, inscriptions and obscure texts he identifies the Theban legion as fact and sheds light on their fate.

In the process he paints a powerful portrait of an empire in turmoil, beset by external enemies and driven by religious and moral uncertainties within.