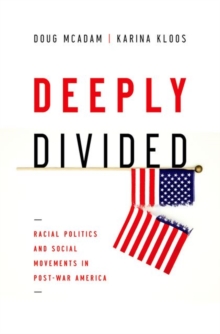 The United States is now more starkly divided in political terms than at any time since the end of Reconstruction and more unequal in material terms than on the eve of the Great Depression.

How did we go from the bipartisan cooperation and relative economic equality of the war and postwar years to today's inequality and partisan divisions?

In Deeply Divided, sociologists Doug McAdam and Karina Kloos argue that to represent contemporary political polarization and economic inequality as byproducts of party politics alone is to distort the complex origins of the mess in which we find ourselves today.

Rather, it is social movements, from the Civil Rights movement to today's Tea Party, that have pushed Republicans and Democrats toward the fringes.

Owing in large part to WWII and then to the Cold War and McCarthyism, the period from 1940 to 1960 was uniquely devoid of social movement activity.

Spared these pressures, both parties were able to hew to the ideological middle, creating opportunities for bipartisan cooperation and conditions for relative material equality.

Social movements re-emerged as a significant force in the 1960s, moving the Democrats and Republicans sharply left and right respectively over the course of the decade.

Themovements most responsible were two linked struggles: the civil rights movement and the nationwide "white backlash" that developed in response. Over the past half-century social movements have continued to challenge parties as the dominant mobilizing force in American politics.

This is especially true today on the right, where the Republican Party and the policies of its House delegation largely reflect the views of its mobilized movement wing.

McAdam and Kloos stress that a reversal of these trends is possible-if only we are able to understand the challenges involved in overcoming political and economic divisions.