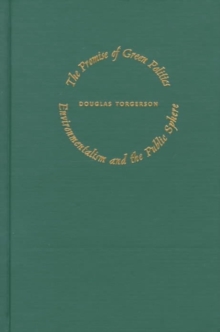 The Promise of Green Politics : Environmentalism and the Public Sphere Hardback

Politics today is dominated by business news and the stock market.

But those in support of green politics ask whether human profit should continue to be the bottom line of political deliberations or if it is time for the interests of the natural world to combine with or even displace the interests of business.

In The Promise of Green Politics Douglas Torgerson offers a survey of different schools of ecological thought, discusses their implications for the larger political sphere, and advances a three-dimensional concept of politics that emphasizes ethics and discourse as well as strategy. Arguing that the environmental movement has the potential to contribute to contemporary developments in political theory and social action by changing discursive practices both at the grassroots level and along the corridors of power, Torgerson draws on the theories of Hannah Arendt and others to advocate a performative type of political debate that values multiple opinions and is not always oriented toward reaching a single conclusion.

Torgerson argues that in a world stuck in administrative and scientific gridlock, the theatrical, comic aspects of green politics are as important as other, more goal-oriented, aspects.

Gestures of the carnivalesque-such as protestors sleeping in hammocks slung from trees targeted for destruction or funeral processions held for dying rivers-could be the key to the creation of what Torgerson refers to as a "green public sphere," one that promises a reconfiguration of the relationship between human creativity and the natural world.

While offering a number of concrete policy suggestions, his focus remains on the complexity and heterogeneity of green thinking and on the transformative promise implicit in green politics.

In creating new ways to speak about the environment, Torgerson argues, the green movement offers a creative way to reconsider many larger issues of political theory and action.

The Promise of Green Politics will serve as a gateway to new thinking about green politics and the emerging possibilities of a diverse and vital green public sphere.

As such, it will be valued by those interested in environmental and public policy, political theory, social activism, and the future of political action. 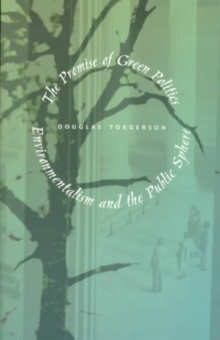 The Promise of Green Politics