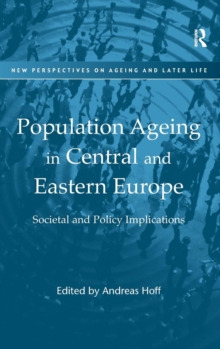 During the 1990s, Europe became the first continent with a 'mature society', where people aged 60 years and older outnumber children and as this trend continues, the resulting 'ageing societies' will differ from previous societies in their make-up, in their needs, and in their resource allocation.

Population ageing poses an even greater challenge to the post-communist societies of Central and Eastern Europe.

While still struggling to cope with the aftermath of the economic and social transition process following the breakdown of communism, they are now facing even more rapid demographic change than Western Europe. This book brings together leading scholars to present an understanding of the processes underlying the very rapid population ageing in Central and Eastern Europe. In addition to discussing the main demographic drivers behind this development in each of the countries examined, this volume also discusses its implications for policy, healthcare provision, workforces, intergenerational family relations, the social cohesion of future Central and Eastern European societies, and the quality of life experienced by their citizens. Organised around broad geographical regions with final sections analysing the book's findings and their future implications, Population Ageing in Central and Eastern Europe will be of interest to gerontologists, policy makers, students and scholars of population change