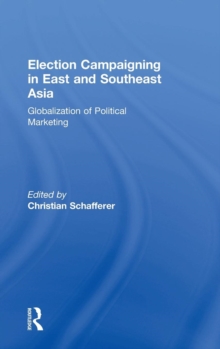 At the end of the last century, political marketing appeared to have become a global phenomenon with an increasing number of electoral campaigns resembling those of the United States.

Comparative research has shown the existence of a so-called 'Americanization' of election campaign practices.

This book examines the nature of electoral campaigns in East and Southeast Asia.

Based on the analyses of developments in Japan, Taiwan, South Korea, Malaysia, and the Philippines, it examines whether there is an 'Asian style' of election campaigning. Contributing to the fields of media studies and comparative politics, the book offers an insight into the various changes in election campaigning that occurred in the East and Southeast Asia during the process of democratization and modernization.

It sheds new light on the causes and consequences of the worldwide proliferation of US election campaigning and provides the academic world with previously unpublished material on the electoral strategies of Asian political parties.