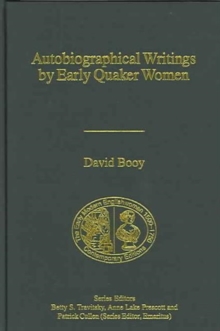 While writings by early modern Quaker women have been discussed and quoted fairly extensively, relatively few of their texts are readily or widely available.

The chief purpose of this edition is to rectify this state of affairs in one central area - that of autobiographical writing. The edition contains substantial excerpts from a range of self-writings by Quaker women, composed between the 1650s and circa 1710: letters, testimonies, memoirs, accounts of spiritual development, narratives of persecution and imprisonment.

Six of the texts have been freshly edited from manuscripts (including Mary Penington's A Brief Account); the others have been transcribed from the first printed editions. In his general introduction to the volume, the editor sketches the history of the Quaker movement from the 1650s to the early 1700s, and considers the role of female Quakers during the first and second phases of the movement. The introduction also surveys the types and purposes of autobiographical writings produced by female Friends, and relates these writings to key Quaker ideas, concerns and practices regarding the inner light, scripture, testimony, plain speaking, friendship, gender and community.

Booy indicates the wider context of the development of autobiographical writing during the seventeenth century, and discusses briefly issues to do with the construction of the self in writing. Each text is prefaced by a substantial headnote providing biographical and historical information.

Footnotes supply biblical and other references, and gloss unfamiliar or specialist vocabulary.

The volume includes a comprehensive bibliography of primary and secondary materials. The edition is aimed at all those interested in the history of the Quakers, whether they be scholars in the fields of religious, cultural and women's studies, or of history and literature generally. 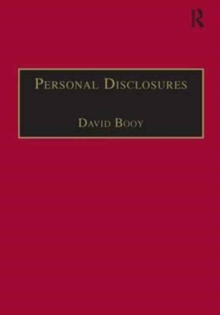