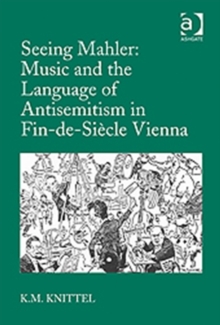 Seeing Mahler: Music and the Language of Antisemitism in Fin-de-Siecle Vienna Hardback

No-one doubts that Gustav Mahler's tenure at the Vienna Court Opera from 1897-1907 was made extremely unpleasant by the antisemitic press.

The great biographer, Henry-Louis de La Grange, acknowledges that 'it must be said that antisemitism was a permanent feature of Viennese life'.

Unfortunately, the focus on blatant references to Jewishness has obscured the extent to which 'ordinary' attitudes about Jewish difference were prevalent and pervasive, yet subtle and covert.

The context has been lost wherein such coded references to Jewishness would have been immediately recognized and understood. By painstakingly reconstructing 'the language of antisemitism', Knittel recreates what Mahler's audiences expected, saw, and heard, given the biases and beliefs of turn-of-the-century Vienna.

Using newspaper reviews, cartoons and memoirs, Knittel eschews focusing on hostile discussions and overt attacks in themselves, rather revealing how and to what extent authors call attention to Mahler's Jewishness with more subtle language. She specifically examines the reviews of Mahler's Viennese symphonic premieres for their resonance with that language as codified by Richard Wagner, though not invented by him. An entire chapter is also devoted to the Viennese premieres of Richard Strauss's tone poems, as a proof text against which the reviews of Mahler can also be read and understood. Accepting how deeply embedded this way of thinking was, not just for critics but for the general population, certainly does not imply that one can find antisemitism under every stone.

What Knittel suggests, ultimately, is that much of early criticism was unease rather than 'objective' reactions to Mahler's music - a new perspective that allows for a re-evaluation of what makes his music unique, thought-provoking and valuable.