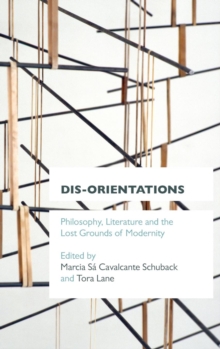 Dis-orientations : Philosophy, Literature and the Lost Grounds of Modernity Hardback

This highly original collection of essays contributes to a critique of the common understanding of modernity as an enlightened project that provides rational grounds for orientation in all aspects and dimensions of the world.

An international team of contributors contend that the modern principles of foundation show in themselves rather how modernity is disorienting itself.

The book brings together discussions on the writings of philosophers who treat more systematically the questions of foundation and orientation, such as Kant, Nietzsche, Husserl, Heidegger, Pascal, and Patocka, and studies of literary works that explicitly thematize this question, such as Novalis, Hoelderlin, Beckett, Platonov, and Benjamin.

This multi-disciplinary approach brings to the fore the paradox that modern figures of grounding and orientation unground and disorient and demonstrates a critical path to review current understandings of modernity and post-modernity.