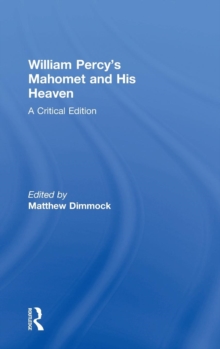 William Percy's Mahomet and His Heaven : A Critical Edition Hardback

William Percy's Mahomet and His Heaven (1601) is extraordinary.

Not only is it the only early modern play purportedly based upon the Qur'an, but it is also the first to place the Prophet Muhammad on the stage.

While there existed a remarkable range of texts concerning Islamic characters and themes in Renaissance England, from chronicles and pamphlets to popular drama, the publication of this edition of Mahomet and His Heaven represents a major step forward in the study of Islam on the early modern stage. Roughly contemporary with Shakespeare's Othello, William Percy makes the remarkable and potentially highly provocative gesture of locating the Prophet as its central character, presiding over an apocalyptic drought to chastise the sins of mankind.

The play takes place in around the mosques of 'Medina' and the action mirrors early Christian 'translations' of the Qur'an, the Islamic holy text that was rarely available in England at the time.

Furthermore, the play provides a fascinating insight into the way that Islamic characters were portrayed on the early modern stage, containing as it does remarkably detailed stage directions, stipulating for example that the Prophet wears 'all greene and greene his Turban' and that his Angels are 'rainbow powdered'.

Such details offer an entirely new perspective upon this aspect of early modern stagecraft. Matthew Dimmock presents here the play in its entirety, with a critical introduction which introduces some of its key themes, and places it in a textual and social context.

A section of detailed explanatory scholarly notes follow the play, containing a full translation of the short Latin sections and references to the many political and literary parallels.

This book should be required reading for historians, literary scholars and students dealing with notions of race, religion, magic, astrology and stagecraft in early modern England.