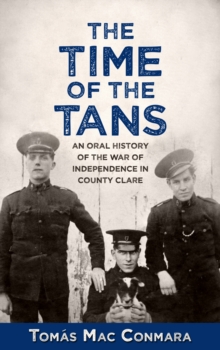 The Time of the Tans : An Oral History of the War of Independence in County Clare Paperback / softback

`The Black and Tans [raises voice] raided my aunt's house where my mother was in bed at three o'clock in the morning ...

I was due to be born three days later ... she got a stroke of paralysis and lost the power of all her left side.

So I never saw my mother walk ... she could get around with the aid of a chair.'Stories of the Black and Tans have been told across Ireland since the force was first released into the country in March 1920.

Casting a dark and lingering shadow, they remain an evocative and emotive category of memory.

For people who lived through it and those who inherited associated stories, the Black and Tans were the embodiment of British repression, violence and malevolence.

The Irish War of Independence is a landmark in the chronology of Irish history and profoundly affected all areas of life.

Much of that experience was never recorded. Based on Tomas Mac Conmara's almost two decades of oral history recordings, selected from over 400 interviews, as well as access to multiple private family collections, The Time of the Tans illuminates the stories of a period that has dominated the historical consciousness of Ireland.

From direct testimony of 105-year-old Margaret Hoey, to the inherited tradition of Flan O'Brien, who was born in 1927, the stories pulsate with an intensity of emotion. The majority of interviewees who were recorded for this research have sadly since passed away.

Now, their memories which have been preserved for posterity, breathe new life into an enduringly important period in modern Irish history.