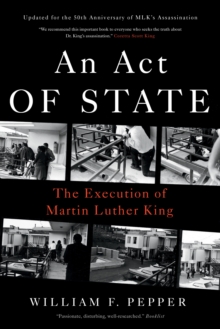 An Act of State : The Execution of Martin Luther King Paperback / softback

On April 4 1968, Martin Luther King was killed and a clean-up operation was set in motion - James Earl Ray was framed, the crime scene was destroyed, and witnesses were killed.

William Pepper, attorney and friend of King, has conducted a thirty-year investigation into his assassination.

In 1999, Loyd Jowers and other co-conspirators were brought to trial in a civil action suit on behalf of the King family.

Seventy witnesses set out the details of a conspiracy that involved J.

Edgar Hoover and the FBI, Richard Helms and the CIA, the military, Memphis police, and organized crime.

The jury took an hour to find for the King family. In An Act of State, you finally have the truth before you - how the US government shut down a movement for social change by stopping its leader dead in his tracks.