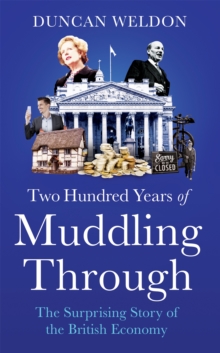 Two Hundred Years of Muddling Through : The surprising story of Britain's economy from boom to bust and back again Hardback

The UK is, at the same time, both one of the world's most successful economies and one of Europe's laggards.

The country contains some of Western Europe's richest areas such as the south east of England, but also some of its poorest such as the north east or Wales.

It's really not much of an exaggeration to describe the UK, in economic terms, as 'Portugal but with Singapore in the bottom corner'. Looking into the past helps understand why. Two Hundred Years of Muddling Through tells the story of how Britain's economy and politics have interacted with each other from the time of the Industrial Revolution right up to the pandemic of 2020.

A few politicians, such as Peel, Gladstone, Attlee and Thatcher have managed to shape the economy but far more have been shaped by it. Depressing little in British economic debate is really new.

This time is rarely, if ever, really different. The debates about the balance between economic openness and sovereignty that re-emerged after Brexit would have been familiar to Peel and Cobden in the 1840s.

The size of the government's deficit has dominated politics since 2010 but fretting about the scale of the national debt was almost a national pastime during Victoria's reign.

Worries about the failure of vocational training and a paranoia that German manufacturing was powering ahead were common in the days of Lloyd George and Asquith.

Supposedly modern concerns about the impacts of new technology on jobs and inequality date back to at least Captain Swing and Ned Ludd.

As the economy emerges from the Covid-19 recession and sets out on a new post-Brexit future an understanding of the past is vital to seeing how the future might play out.