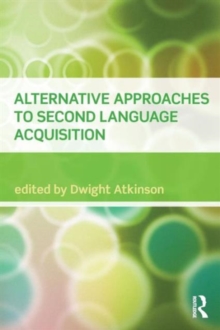 This volume presents six alternative approaches to studying second language acquisition - 'alternative' in the sense that they contrast with and/or complement the cognitivism pervading the field.

All six approaches - sociocultural, complexity theory, conversation-analytic, identity, language socialization, and sociocognitive - are described according to the same set of six headings, allowing for direct comparison across approaches. Each chapter is authored by leading advocates for the approach described: James Lantolf for the sociocultural approach; Diane Larsen-Freeman for the complexity theory approach; Gabriele Kasper and Johannes Wagner for the conversation-analytic approach; Bonny Norton and Carolyn McKinney for the identity approach; Patricia Duff and Steven Talmy for the language socialization approach and Dwight Atkinson for the sociocognitive approach.

Introductory and commentary chapters round out this volume.

The editor's introduction describes the significance of alternative approaches to SLA studies given its strongly cognitivist orientation.

Lourdes Ortega's commentary considers the six approaches from an 'enlightened traditional' perspective on SLA studies - a viewpoint which is cognitivist in orientation but broad enough to give serious and balanced consideration to alternative approaches. This volume is essential reading in the field of second language acquisition.