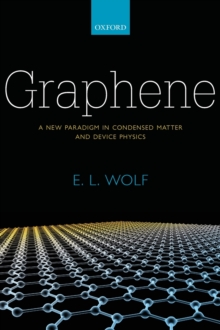 The book is an introduction to the science and possible applications of Graphene, the first one-atom-thick crystalline form of matter.

Discovered in 2004 by now Nobelists Geim and Novoselov, the single layer of graphite, a hexagonal network of carbon atoms, has astonishing electrical and mechanical properties.

It supports the highest electrical current density of any material, far exceeding metals copper and silver.

Its absolute minimum thickness, 0.34 nanometers,provides an inherent advantage in possible forms of digital electronics past the era of Moore's Law.

The book describes the unusual physics of the material, that it offers linear rather than parabolic energy bands.

The lattice symmetry further implies a two-component wave-function, which has a practical effect of cancelling direct backscattering of carriers.

The material istwo-dimensional, but in sizes micrometers nearly to meters displays great tensile strength but vanishing resistance to bending.

As explained, these predictions seem not of practical consequence, and such effects are unobservable in samples up to nearly one meter size.

The classes of applications correlate with differing methods of fabrication, from inexpensive chemical exfoliations of graphite, to chemical vapour deposition on catalytic substrates as Cu and Ni, attemperatures around 1300K.

The chance to supplant the dominant CMOS family of silicon logic devices is assessed.