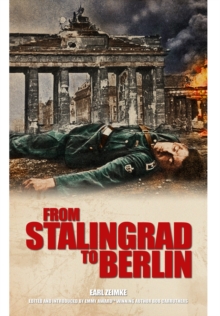 From Stalingrad to Berlin: The Illustrated Edition Paperback / softback

This new illustrated volume of one of the most the authoritative texts on World War II concentrates on the Russo-German war from Stalingrad to Berlin.

Topics include the strategies and tactics adopted by both sides, partisan and psychological warfare, coalition warfare, and manpower and production problems faced by both countries but by the Germans in particular. With a new introduction by Emmy AwardTM winning historian Bob Carruthers and numerous rare illustrations this powerful book is the ideal companion to the highly acclaimed 'Barbarossa - Hitler Turns East' and makes for a welcome addition to any Second World War library.