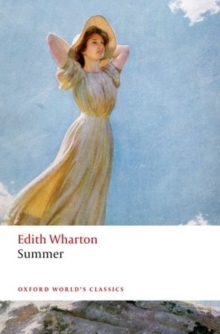 'Can't you see that I don't care what anybody says?' Charity Royall lives in the small New England village of North Dormer. Born among outcasts from the Mountain beyond, she is rescued by lawyer Royall and lives with him as his ward. Never allowed to forget her disreputable origins Charity despises North Dormer and rebels against the stifling dullness of the tight-knit community surrounding her. Her boring job in the local library is interrupted one day by the arrival of a young visiting architect, Lucius Harney, whose good looks andsophistication arouse her passionate nature. As their relationship grows, so too does Charity's conflict with her guardian; darker undercurrents start to come to the surface. Summer is often compared to Wharton's other New England story, Ethan Frome, and it shares the same intensity of feeling and repression. Wharton regarded it as one of her best works, and its compelling story of burgeoning sexuality and illicit desire has a strikingly modern and troubling ambiguity. ABOUT THE SERIES: For over 100 years Oxford World's Classics has made available the widest range of literature from around the globe.