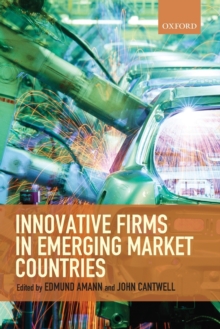 The rise of innovative firms in emerging market economies is an increasingly topical issue.

However, the literature has lagged behind in helping us understand this phenomenon.

Addressing this gap, the book draws on a variety of firm-level experiences across a range of key countries, sectors, and institutional contexts.

Despite the obvious differences, the book finds a commonality in these experiences: they have all been influenced by shifts in the institutional,technological, and policy environment, in particular by the opening up of emerging market economies over the past three decades, and the consequent increase in international business interactions.

Across the different countries surveyed in Asia and Latin America, the book argues that firm level innovation has been strongly influenced by capabilities that had previously been built up in a relatively closed environment.

However, in the current more open environment, it is suggested that innovation among firms also reflects differences in these national historical contexts, as well as in the different forms of interaction with international business that have subsequently emerged.

This bookis a valuable resource for academics, researchers, and graduate students in international business and technology management.