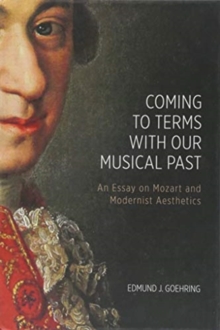 For over a generation now, many leading performers, critics, and scholars of Mozart's music have taken a rejection of transcendence as axiomatic.

This essentially modernist, antiromantic orientation attempts to neutralize the sorts of aesthetic experiences that presuppose an enchantment with Mozart's art, an engagement traditionally articulated by such terms as intention, mimesis, author, and genius. And what is true of much recent Mozart interpretation is often manifest in the interpretation of Western art music more generally. Edmund Goehring's Coming to Terms with Our Musical Past explores what gets lost when the vocabulary of enchantment is abandoned.

The book then proceeds to offer an alternative vision of Mozart's works and of the wider canon of Western art music.

It sees less because it excludes a necessary and enlarging human presence: the generative, and receiving, "I." This fascinating new book-length essay is addressed to any reader interested in the performing arts, visual arts, and literature and their relationship to the broader culture.

Goehring draws on seminal thinkers in art criticism and philosophy to propose that such works as Mozart's radiate an idealism that has human sociability both as its source and its object. Edmund J. Goehring is Professor of Music History at the University of Western Ontario.