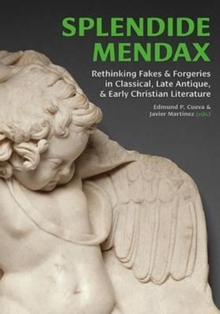 Scholars for centuries have regarded fakes and forgeries chiefly as an opportunity for exposing and denouncing deceit, rather than appreciating the creative activity necessary for such textual imposture.

But should we not be more curious about what is spurious?

Many of these long-neglected texts merit serious reappraisal, when considered as artifacts with a value beyond mere authenticity.

We do not have to be fooled by a forgery to find it fascinating, when even the intention to deceive can remind us how easy it is to form beliefs about texts.

The greater difficulty is that once beliefs have been formed by one text, it is impossible to approach the next without preconceptions potentially disastrous for scholarship.

The exposure of fraud and the pursuit of truth may still be valid scholarly goals, but they implicitly demand that we confront the status of any text as a focal point for matters of belief and conviction.

Many new and fruitful avenues of investigation open up when scholars consider forgery as a creative act rather than a crime.

We invited authors to contribute work without imposing any restrictions beyond a willingness to consider new approaches to the subject of ancient fakes and forgeries.

The result is this volume, in which our aim is to display some of the many possibilities available to scholarship when the forger is regarded as "splendide mendax" - splendidly untruthful.