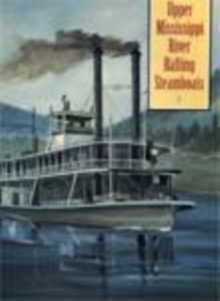 by Edward A. Mueller

As a Wisconsin historical marker explains: "After 1837 the vast timber resources of northern Wisconsin were eagerly sought by settlers moving into the mid-Mississippi valley.

By 1847 there were more than thirty saw-mills on the Wisconsin, Chippewa, and St.

Spring thaws flushed the logs down the streams toward the Mississippi River.

Here logs were caught, sorted, called and rated. Between 1837 and 1901 more than forty million board feet of logs floated down the great River to saw-mills.

The largest log raft on the Mississippi was assembled at Lynxville in 1896.

It was 270 feet wide and 1550 feet long, containing two and one-fourth million board feet of lumber.

The largest lumber raft on the river originated on Lake St.

The last rafting of lumber on the Mississippi came in 1915, ending a rich, exciting and colorful era in the history of Wisconsin and the Great River."Edward A.

Mueller's extraordinary collection of over two hundred contemporary photographs and illustrations depicting the river rafting era are accompanied by short histories and anecdotes that preserve the story of the "rafters," the workboats that literally helped build a nation after the Civil War.