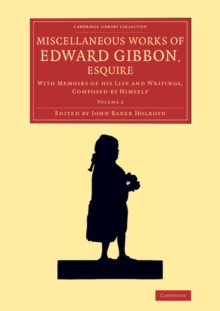 Miscellaneous Works of Edward Gibbon, Esquire : With Memoirs of his Life and Writings, Composed by Himself Paperback / softback

Volume 2 contains abstracts from Gibbon's reading, with his reflections on what he read, and extracts from his journal (sometimes in French, with a parallel translation), short pieces on various aspects of Roman history, an outline of his planned history of the world from the ninth to the end of the fifteenth century, literary criticism, a history of the House of Brunswick (ancestors of the Hanoverian British royal family), and a riposte to a criticism of his own great work, The History of the Decline and Fall of the Roman Empire, which is also reissued (in the 1896-1900 edition by J.