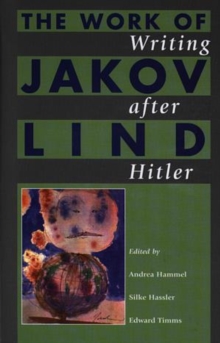 Writing After Hitler : The Work of Jakov Lind Hardback

Writing After Hitler: The Work of Jakov Lind is the first comprehensive study of this creative and controversial writer and will be of interest not only to students and academics working in German and Austrian Studies, but to everyone interested in the Holocaust, the literature of exile and the cultural legacy of central European Jewry.

Jakov Lind was born in Vienna in 1927. As an eleven-year old boy from a Jewish family, he left Austria after the Anschluss, found temporary refuge in Holland, and succeeded in surviving inside Nazi Germany by assuming a Dutch identity.

After a literary apprenticeship in Israel, he made his reputation through works of fiction written in German, although he now lives in Britain and writes in English.

Lind's writings are distinguished by an extraordinary variety of stylistic and linguistic modes, which are used, in both his autobiographical and his fictional narratives, to express the experiences of exile, linguistic dislocation and cultural uncertainty.

The articles collected in this volume reassess the strategies which Lind adopted to explore the implications of living and writing 'after all that occurred under Hitler'.