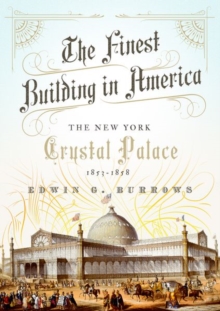 Built in 1853 in New York's Bryant Park and immediately pronounced the most beautiful structure in America, the Crystal Palace was intended not simply to emulate but rival the famous Victorian landmark in London's Hyde Park.

As with its English counterpart, however, its beauty was ephemeral.

It caught fire, and on October 5, 1858, "great waves of lurid light" overtook spectators and those rushing to save it.

Within thirty minutes, the beloved dome was nothing but aheap of smoldering debris. In his latest book, Edwin G. Burrows, winner of the 1999 Pulitzer Prize for History and co-author of Gotham: A History of New York to 1898, offers a memorable and elegiac look at the Crystal Palace.

While it didn't match in dimension Robert Paxton's London original - the scale of which was truly colossal - the New York version became a beloved landmark almost from the instant of its creation.

Centerpiece of the 1853 World's Fair, it was home to numerous exhibitions and became ashowplace for displaying the growing industrial might of the nation.

Walt Whitman rhapsodized about it as "Earth's modern wonder, History's Seven outstripping." Its sudden loss provoked intense mourning-matched only perhaps by the razing of the old Penn Station a century later-and then gradually it slipped frommemory.

The Finest Building in America will evoke the Crystal Palace's life and times, replete with beautiful period images.

The first book-length account of the building's short but glorious life, Burrows book aims to restore it in the minds and hearts of New Yorkers and New York aficionados and fans everywhere.